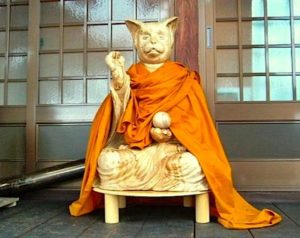 Nearly every guide book for Japan mentions Hachiko, the dog who patiently waited every day for nine years in the 1920s and ‘30s in front of Shibuya Station for his master to come home, never knowing that the man had passed away at the office. It’s a touching story of devotion, and one so well-known Hachiko now has his own statue near his waiting spot.

However, some argue that Hachiko didn’t come to the station every day because he was hoping for his master to return, but because of the free handouts of food he got once he became a local celebrity. Could it be that the friendly pooch actually isn’t the epitome of animal-human loyalty?

Maybe that title would be a better fit for a cat that lived hundreds of years before Hachiko was even born, and displayed such fealty to its samurai master that its entire species is honored at their own Cat Temple. 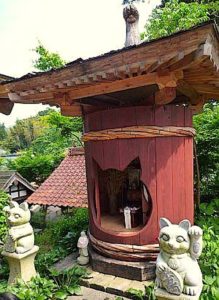 We’ll have to head out of Tokyo to get to this monument to kitty compassion though, as it lies in the town of Hagi in west Japan’s Yamaguchi Prefecture. Hagi has a number of historical and cultural attractions, including a ruined castle and preserved samurai quarter. We’ll be skipping those, however, and going straight to Unrinji, also known as Nekodera, or, the Cat Temple.

The history of Unrinji is actually connected to that of the Mori samurai clan, which made Hagi Castle its base of power. When Lord Mori Terumoto passed away, his retainer Nagai Motofusa was so distraught that he committed ritual suicide in order to join his master in the afterlife.

This extreme act of fealty left Nagai’s cherished pet cat with no one to care for it, however. The samurai’s sense of loyalty seems to have rubbed off the animal, and for the next 49 days straight, the cat refused to leave its late master’s grave at Tenjuin Temple.