An great piece from the L.A. Times digging deep into dog DNA… 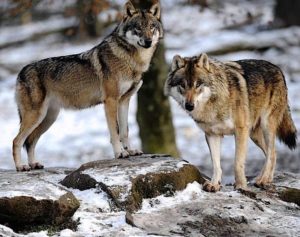 Long ago, some brazen wolves started hanging around human settlements, jump-starting events that ultimately led to today’s domesticated dogs. Now geneticists say they have identified one of the key changes that turned wolves into the tame, tail-wagging creatures well-suited to living by our sides — the ability to digest carbohydrates with ease.

The report, published online Wednesday by the journal Nature, found signs that dogs can break down starch into sugar, and then transport those sugars from the gut into the bloodstream, more efficiently than can wolves. Comparing dog and wolf DNA, the authors pinpointed several changes in starch and sugar-processing genes that would have made early dogs better able to digest the scraps they scavenged from dumps in early farming villages, helping them to thrive as they gave up the independent life of the pack to entwine their lives with ours.

“That food was obviously the same kind of food that we were eating,” most likely a mix of roots, porridge and possibly bread along with bones containing meat and marrow, said study leader Erik Axelsson, an evolutionary geneticist at Uppsala University in Sweden.

No one knows for sure when or where the first dogs came to be, but most evolutionary biologists agree that the wolf probably made the first move and that the draw was the food humans discarded. Only much later did people intensively mate dogs of different shapes and temperaments to create today’s hundreds of breeds and varieties, from the hulking and noble to the tiny and yapping.

The new analysis by Axelsson and his colleagues examined a mix of DNA from 12 gray wolves and compared it with DNA collected from 60 domestic dogs, including cocker spaniels, giant schnauzers, golden retrievers and 11 other breeds.

The scientists sequenced the dog and wolf DNA and searched for tiny differences. Because they were seeking features that cropped up early in dog evolution, they focused on genetic variations that dogs shared but wolves lacked. They also looked for variations that all, or most, of the dogs had in common.

From this analysis, the team identified 36 places in the genome, containing 122 genes, that seemed to have been important in dog evolution. Ten of the genes are involved in starch or fat metabolism, including three that carry instructions for making a protein that is pivotal to digestion of starch.

One of them makes alpha amylase, an enzyme that breaks starch into the sugar maltose and shorter carbohydrate strands. Dogs carry many more copies of this gene than wolves, the scientists found — and the alpha amylase activity in their tissues is five times greater.

Another gene makes an enzyme for the next step in carb digestion: turning maltose into glucose. This gene is 12 times more active in dogs than wolves, and blood tests showed that maltose is processed into glucose twice as quickly in dogs.