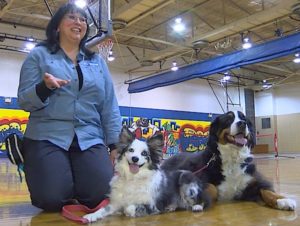 If you think a smart dog is one who can roll over or shakes hands on command, you haven’t met Mia. Mia, can read. Or at least Mia’s owner says she can.

Dog trainer Maureen Ward says she taught her mini Australian Shepherd how to read using a technique she developed herself. And she says she can teach other dogs to read too.

“When I say by week four your dogs are qualified to read, and they’re like no way!” Ward says of other owners. “And sure enough the dogs are reading by four weeks and their jaws are just dropping to the ground.”

Ward and Mia recently found the perfect place to show off the trick of all dogs tricks. The Brown School in downtown Louisville.

The duo visited the students with large laminated cards, each one featuring a single word. Once those cards were shuffled, the students amazement began.

One at a time, Ward held a card up for Mia to see. And Mia responds by acting out the words on the card.

Mia lifted one of her paws.

A second one read “Jump.”

Mia leapt in the air.

Ward taught her to read – and it’s not because Mia is special. She said she can teach any dog the same skill in only four weeks.

For example, Bower a Bernese Mountain dog, who she also brought in to read. The handsome energetic dog proved to be more than a looker – his skills include break dancing and waving.

“People don’t realize what they can do,” said Ward.