A new discovery offers insight into the evolution of big cats… 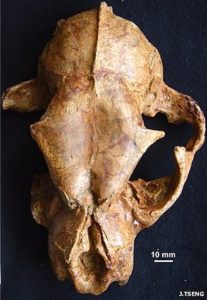 The oldest big cat fossils ever found – from a previously unknown species “similar to a snow leopard” – have been unearthed in the Himalayas.

The skull fragments of the newly-named Panthera blytheae have been dated between 4.1 and 5.95 million years old.

Their discovery in Tibet supports the theory that big cats evolved in central Asia – not Africa – and spread outward.

The findings by US and Chinese palaeontologists are published in the Royal Society journal Proceedings B.

They used both anatomical and DNA data to determine that the skulls belonged to an extinct big cat, whose territory appears to overlap many of the species we know today.

“This cat is a sister of living snow leopards – it has a broad forehead and a short face. But it’s a little smaller – the size of clouded leopards,” said lead author Dr Jack Tseng of the University of Southern California.

“This ties up a lot of questions we had on how these animals evolved and spread throughout the world.

“Biologists had hypothesised that big cats originated in Asia. But there was a division between the DNA data and the fossil record.”