Author Mimi Matthews has a brilliant blog that includes articles on the history of dogs and cats.  Check out this terrific report about the first cat show, an event which took place 145 years ago at the Crystal Palace in London… 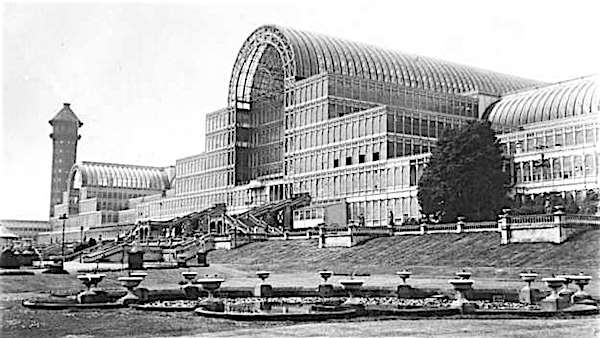 In 1871, at the instigation of cat fancier Harrison Weir, the first ever cat show was held in England.  The concept was a novel one.  At the time, there were no breed registries for cats and no precise standards on which to judge them.  However, Weir was nothing if not persuasive.  Within days of having first broached the subject with the manager of the Crystal Palace in Sydenham, London, Weir presented his full scheme, including the schedule of prizes, price of entry, number of classes, and even the points by which the cats would be judged.

The cats were to be divided into diffeent varieties of color, form, size and sex.  Coat patterns such as tabby and tortoiseshell would also be represented.  All that remained was to find the cats to participate in the show.  With no breeders to approach and a lack of people willing to part with their pet cats for any length of time, Weir and the representatives of the Crystal Palace “went forth into the highways and byways on the lookout for presentable animals.”

Despite their efforts, the quota of cats necessary for the cat show had still not been met.  In an article in the 1891 issue of Pearson’s Magazine, writer G. B. Burgin relates how this shortage was resolved.  He writes:

“Then someone discovered that the Palace cellars were full of cats and kittens and mice, so a few workmen were set to work cat-hunting there.  The workmen also brought their own cats to the show.”

The domestic cats on display were supplemented by examples of cats both rare and exotic.  There was a Manx from the Isle of Man, a Persian cat “direct from Persia,” and an enormous English cat weighing in at 21 pounds who was, according to the 1871 issue of Harper’s Weekly, “the biggest in the show.”  Of particular note, the first two Siamese cats ever seen in the country were also on exhibit.  Harper’s describes them as:

“…soft, fawn-colored creatures, with jet-black legs – an unnatural, nightmare kind of cat, singular and elegant in their smooth skins, and ears tipped with black, and blue eyes with red pupils.” 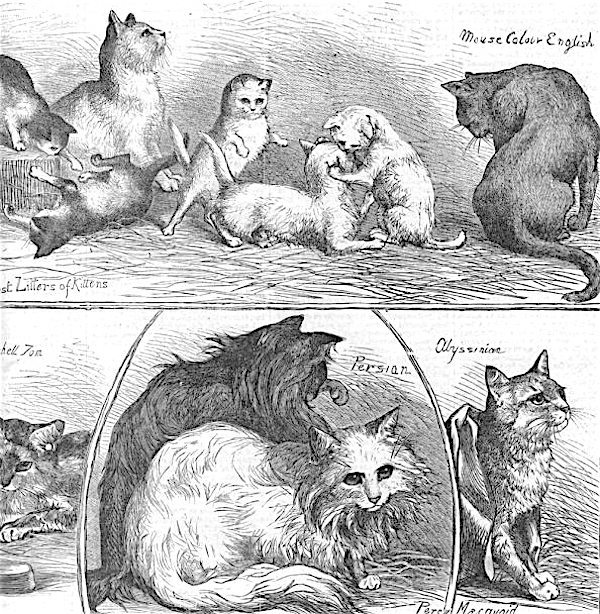 Perhaps the most exciting addition to the cat show was a British wildcat exhibited by the Duke of Sutherland.  According to Harper’s Weekly, this variety of wildcat was almost extinct in the British Islands.  And the duke’s cat was truly wild.  Harper’s states:

“He behaved like a mad devil, and ten men could not get him into a wire cage out of the box in which he was sent.”

The 1871 issue of Lippincott’s Monthly Magazine reports that there were 211 cats on exhibition at the cat show at the Crystal Palace – many of them “torn from their domestic hearths.”  Harper’s Weekly reports a lower number, stating that there were 160 specimens of cat at the cat show.  Regardless of the precise number, the event required that those 150+ cats remain in their cages and on public display.  Writing for Lippincott’s, Prentice Mulford relates:

“They were separately confined in two rows of tin cages wired in front.  We who came to gaze, being marshaled in line under the surveillance of a policeman, were made to march slowly up in front of one row of cats and down the other, the cages being placed back to back.  If any lingered by some more attractive cat, the man in authority cried out, as in the streets of London, ‘Move on!’”

Harrison Weir believed the cats to be perfectly content.  Describing the scene that met his eyes upon arriving at the Crystal Palace the morning of the cat show, he states:

“Instead of the noise and struggles to escape, there lay the cats in their different pens, reclining on crimson cushions, making no sound save now and then a homely purring, as from time to time they lapped the nice new milk provided for them.”