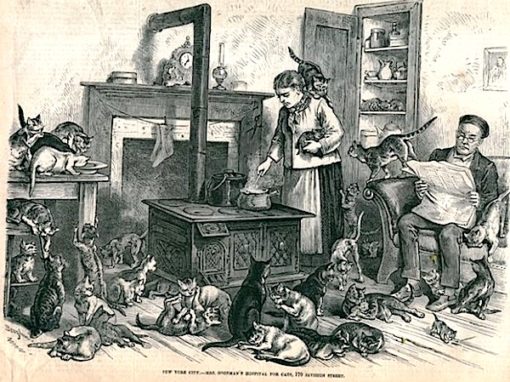 from THE FRENCH HATCHING CAT

Before there was a Seward Park on Essex Street in the Lower East Side of Manhattan, there was a square block of old wooden houses and crumbling brick tenements where hundreds of immigrants and alley cats made their home.

There once was a woman who lived in a dilapidated frame tenement house on the Lower East Side. She had so many cats – about 80 – there was no place for them to hide.

No, this is not a Mother Goose nursery rhyme. It’s a true story about Rosalie Goodman and her home for down-and-out cats in New York’s Lower East Side.

Rosalie Goodman was a cat hoarder, or what we’d call a crazy cat lady. For almost a decade, she offered food and shelter for all the abused, abandoned, and injured felines that lived in the neighborhood bordered by Orchard, Hester, and Clinton streets and East Broadway. The children in the neighborhood called her Catty Goodman. 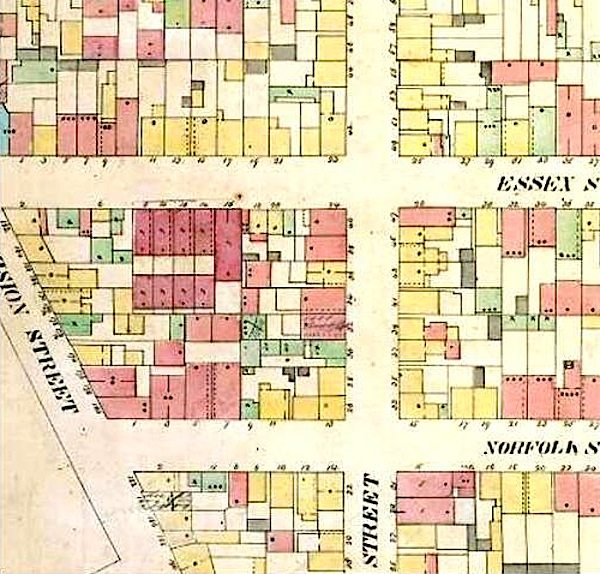 Rosalie (nee Rose Waare), was born in the Kingdom of Prussia in 1836, give or take a few years. She and her husband, Henry, a cigar maker (spelled “segar” on the 1870 Census report), came to America in the late 1850s and had four children: Elizabeth, Regina, Hilde, and Oscar. In 1870, the family was residing in an apartment at 175 Madison Street (near where the Manhattan Bridge is today).

Shortly after Henry’s death in 1871, Rosalie purchased the 17th-century house at 170 Division Street from Moses Bonner (Moses operated a cigar store there, so perhaps Henry Goodman had worked with him.) In his book, “New York by Sunlight and Gaslight: A Work Descriptive of the Great American Metropolis,” published in 1882, James Dabney McCabe calls this house “one of the greatest curiosities in New York.” 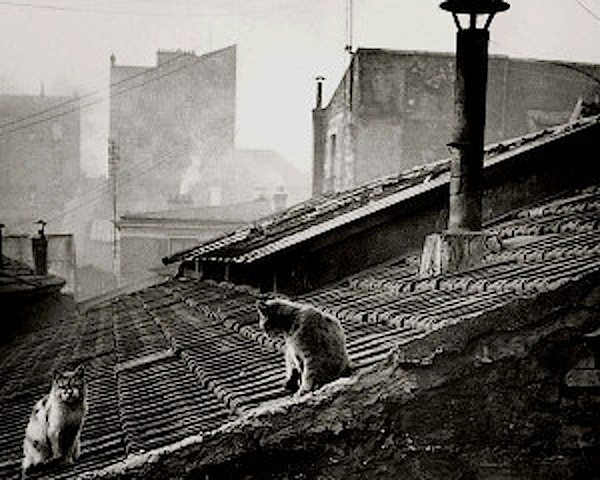 In the winter of 1875, a reporter from the New York Sun paid Rosalie a visit to see if rumors of this crazy cat woman were true. Upon his arrival, he saw dozens of cats hanging out in the nearby alleys, and on the eaves and window sills of her ramshackle home. In his front-page story, which was picked up by several newspapers in New York and other states, he paints a very vivid picture of the house where Rosalie and her feline boarders lived:

“The house was a three-story wooden building, gambrel-roofed and withered with age, and dates back to the Dutch period of the city. The sides and roof have collapsed with the pressure of time, and the clapboards and shingles, mossed and blackened, hang in tatters from the decaying beams and rafters. Inside, the oaken stairs and hall floors are worn into hollows from the use of former generations, and the rooms are low-ceilinged, narrow, and dusty, lighted by high, small-paned windows, and still provided with wide, open, old-fashioned fireplaces.”

Outside, there was a courtyard about 15 feet deep, which was enclosed by a 10-foot fence. Scattered throughout the yard on that day in February 1875 were dozens of cats dining on soup and milk contained in white and yellow earthenware dishes. The reporter noted:

“The yard in the rear is a special playground of the museum. It is spacious, dirty and abounding in sly nooks that are just the thing for cats. At the back are a half-dozen patched wooden buildings similar to the one inhabited by Mrs. Goodman, each with an opening upon the enclosure.”