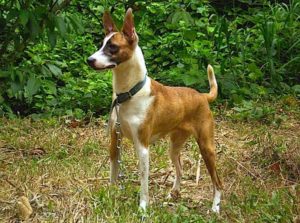 Inside a fenced acre on the swampy Lynches River flood plain in central South Carolina, seven of Don Anderson’s primitive dogs spring into high alert at approaching strangers. Medium-sized, they fan out amid his junkyard of improvised habitat: a few large barrels to dig under, an abandoned camper shell from a pickup, segments of black plastic water pipe and backhoed dirt mounds overgrown with waist-high ragweed.

These are Carolina dogs, and though they are friendly, one can instantly sense they are different from other dogs. Several rush to the gate, their whole bodies wagging eagerly. Others sprint off and take position — their jackal ears fully erect, their fishhook tails twitching like flags in a stiff wind. A black pup scrabbles away in crablike submission that eventually takes her into an underground den, dug deep enough that she is not seen again.

Walking into the pen is dangerous for only one reason: one of the dogs’ defining habits is digging snout pits, or gallon-size holes in the ground, perhaps to root for grubs or munch the soil for nutrients.

“It’s like a lunar landscape,” Mr. Anderson warns as we tread carefully into the underbrush.

Some Carolina dogs still live in the wild, and local people have long thought they were one of the few breeds that predated the European arrival in the Americas: “Our native dog,” as Michael Ruano, another enthusiast who often works with Mr. Anderson, put it. “America’s natural dog.”

Now, a new study of canine DNA backs up the folklore. A team led by Peter Savolainen at the Royal Institute of Technology in Sweden has reported that several dog breeds in the Americas — among them the Peruvian hairless, the Chihuahua and the Carolina dog — are without some genetic markers indicative of European origin, suggesting they arrived in an earlier migration from Asia.