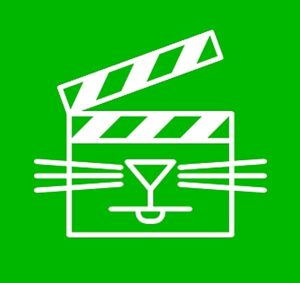 Of course there was a cat-themed soundtrack to the Walker Art Center’s latest edition of their feline film festival. The sexually unambiguous track went mostly unnoticed, though, as the fourth annual event offered much more than cat videos.

Compared to the previous three iterations, this year’s was gathering was luxurious. Instead of cramming onto overlapping blankets on the hill behind the Walker or wading through the Minnesota State Fair crowds to get to the Grandstand, attendees meandered through the stadium and onto the field with enough space for unlimited photo ops.

No famous cats made appearances this year, but in their stead were a giant turquoise puppet cat from In the Heart of the Beast, a make-your-own cat mask booth, a Grumpy Cat meme cutout, a cardboard Maru box, Garfield, a Kitty Disco mural, and the countless costumed fans to take overt or covert selfies with.

By 8 p.m. the festival staff confirmed that the event was sold out at 13,000 tickets, a record for the venue (and a thousand more people than the CHS Field website states it can accommodate). This led to the inevitable long lines for food and beer, but the cat fest crowd was at ease. It was better than the purgatory of the food truck lines at last year’s event at the Walker.

The screening kicked off with St. Paul Mayor Chris Coleman throwing a ball of yarn (for real) and curator Will Braden of Henri, le Chat Noir making a speech. But it was a cat that captured everyone’s attention.

After the stadium lights went dark, a slide appeared on the big screen with a photo of the Golden Kitty award next to Cecil the lion. It read, “This is a trophy. This is not.” Thunderous applause ensued. The reel was dedicated to Cecil — may he rest in peace — a beloved animal killed this summer in Zimbabwe on a Bloomington dentist’s hunting trip.

Once the cat videos began, it felt more like a night at summer camp than a film screening. People of all ages curled up on picnic blankets on the baseball field. Kids in handmade cat masks shrieked during a cat/fish stare down. Beer dabblers sauntered around the edge, stopping to head bang with “Heavy Metal Cats,” then moving on.