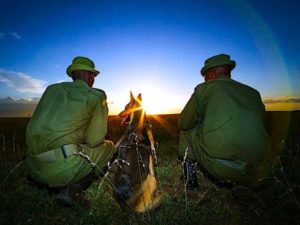 On October 14, tracker dogs led game scouts to a group of armed poachers who were on the run after shooting and killing a well-known old elephant bull just outside Tarangire National Park. This was the latest in a string of successes by Tanzania’s tracker dogs, which are proving to be an effective weapon in the bloody war on elephant poaching in East Africa.

“Apart from their incredible tracking abilities, dogs are wonderful to work with because they don’t have any political agenda—they can’t be compromised,” said Damien Bell, director of Big Life Tanzania, the conservation organization that manages the Big Life Tracker Dog Unit.

“Our dogs have tracked elephant poachers for up to eight hours at a time or more, through extreme conditions—heat, rain, wetlands, mountains—and still turned up results,” he said. “They love their handlers, and they do a job until the job is done.”

The Big Life Foundation first began using dogs for anti-poaching efforts in 2011, after adopting four Alsatians (German shepherds) from kennels in the Netherlands and honing their skills with the help of Canine Specialist Services International, a dog training facility based in northern Tanzania.

Alsatians were picked over bloodhounds as they have more stamina and can better handle the African heat.

Two of the dogs, Max and Jazz, were stationed in southern Kenya. The other two, Rocky and Jerry, were sent to Tanzania to help out in the Amboseli/Kilimanjaro ecosystem, important elephant habitat that straddles the two countries.

Since their arrival, Rocky and Jerry have helped with countless anti-poaching operations, leading to numerous arrests. In fact, the dog teams have become so popular that Tanzania National Parks (TANAPA), the Wildlife Division (a separate agency), the police, and even the military have requested their assistance.