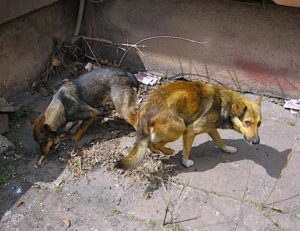 A dog shelter backed by a Russian billionaire is engaged in a frantic last-ditch effort to save hundreds of strays facing a death sentence before the Winter Olympics begin here.

Already, hundreds of animals have been killed, with the local authorities apparently wanting the stray dogs cleared from the streets before Friday’s opening ceremony.

While the authorities say the dogs can be wild and dangerous, reports of their systematic slaughter by a pest removal company hired by the government in recent months have outraged animal rights advocates and cast a gruesome specter over the traditionally cheery atmosphere of the Games.

The handling of the matter has also sharply undercut the image of a friendlier, welcoming Russia that President Vladimir V. Putin has sought to cultivate in recent months.

“We were told, ‘Either you take all the dogs from the Olympic Village or we will shoot them,’ ” said Olga Melnikova, who is coordinating the rescue effort on behalf of a charity called Volnoe Delo (roughly, Good Will), which is financed by Oleg V. Deripaska, one of Russia’s billionaire oligarchs.

“On Monday we were told we have until Thursday,” Ms. Melnikova said.

A “dog rescue” golf cart is now scouring the Olympic campus, picking up the animals and delivering them to the shelter, which is really an outdoor shantytown of doghouses on a hill on the outskirts of the city. It is being called PovoDog, a play on the Russian word povodok, which means leash.

Lying past a cemetery, at the end of a dirt road and without electricity or running water, the makeshift PovoDog shelter is already giving refuge to about 80 animals, including about a dozen puppies. One is a chocolate-colored Shar-Pei and her two mostly Shar-Pei puppies. Another is a large, reddish-brown sheep dog named Kasthan, who likes to jump up and kiss the shelter workers, who are mostly volunteers.

Local animal rights workers say many of the strays were pets, or the offspring of pets, abandoned by families whose homes with yards were demolished over the past few years to make way for the Olympic venues and who were compensated with new apartments in taller buildings, where keeping a pet is often viewed as undesirable.