Check out this post from ABC on some remarkable Russian strays… 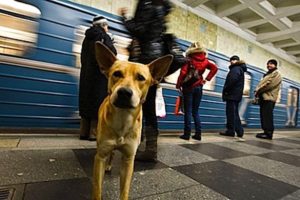 Every so often, if you ride Moscow’s crowded subways, you notice that the commuters around you include a dog – a stray dog, on its own, just using the handy underground Metro to beat the traffic and get from A to B.

Yes, some of Moscow’s stray dogs have figured out how to use the city’s immense and complex subway system, getting on and off at their regular stops. The human commuters around them are so accustomed to it that they rarely seem to notice.

“In Moscow there are all sorts of stray dogs, but… there are no stupid dogs,” Dr. Andrey Poyarkov, a biologist who has studied Moscow’s strays for 30 years, told ABC News. 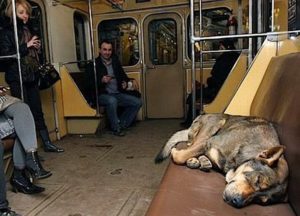 As many as 35,000 stray dogs live in Russia’s capital city. They can be found everywhere, from markets to construction sites to underground passageways, scrounging for food and trying to survive.

Taking the subway is just one of many tactics the strays have come up with for surviving in the manmade wilderness around them.

“The street is tough and it’s survival of the fittest,” says Poyarkov. “These clever dogs know people much better than people know them.”