A startling story from Bloomberg.com about an epidemic of canine overpopulation… 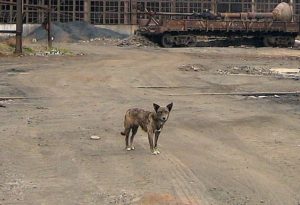 As many as 50,000 stray dogs roam the streets and vacant homes of bankrupt Detroit, replacing residents, menacing humans who remain and overwhelming the city’s ability to find them homes or peaceful deaths.

Dens of as many as 20 canines have been found in boarded-up homes in the community of about 700,000 that once pulsed with 1.8 million people. One officer in the Police Department’s skeleton animal-control unit recalled a pack splashing away in a basement that flooded when thieves ripped out water pipes.

“The dogs were having a pool party,” said Lapez Moore, 30. “We went in and fished them out.”

Poverty roils the Motor City and many dogs have been left to fend for themselves, abandoned by owners who are financially stressed or unaware of proper care. Strays have killed pets, bitten mail carriers and clogged the animal shelter, where more than 70 percent are euthanized.

“With these large open expanses with vacant homes, it’s as if you designed a situation that causes dog problems,” said Harry Ward, head of animal control.

The number of strays signals a humanitarian crisis, said Amanda Arrington of the Humane Society of the United States, based in Washington. She heads a program that donated $50,000 each to organizations in Detroit and nine other U.S cities to get pets vaccinated, fed, spayed and neutered.

Arrington said when she visited Detroit in October, “It was almost post-apocalyptic, where there are no businesses, nothing except people in houses and dogs running around.”