Get to know this volunteer organization from Baltimore, working hard to end animal abuse… 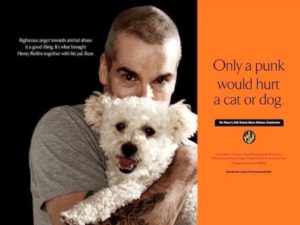 Show Your Soft Side is a public service campaign that was created to change the mindset of young people who all-too-often view the maiming and torturing of defenseless cats and dogs as a sign of “toughness” or “manhood.”  The campaign’s message that compassion towards animals is a sign of strength, not weakness, is one that, overnight, struck a nerve with old and young alike. Today, Show Your Soft Side, Inc. uses its reach and resources to generate awareness, funding and adoptions for shelters and rescues across the country and around the world.

Most marketing campaigns come out of weeks, months or sometimes years of strategizing, with the Show Your Soft Side campaign – it was borne out of a single moment of anger.

In late 2010, Baltimore was beset by one horrific case of animal abuse after another. A nursing cat was set on fire by two 13-year-olds, a gang of kids clubbed a young puppy to death in a public park, and two teens were charged with dousing a dog, later named Phoenix, in kerosene and then setting her on fire. Those hideous events turned out to be a defining moment for three women and one talented photographer in Baltimore, and Show Your Soft was born.

Originally envisioned to be a few posters in City schools, the campaign captured the attention of the media and was soon being shared in households from Baltimore to Brazil, and beyond. Incorporated as a non-profit in 2013, SYSS is run entirely by volunteers with the goal of ending animal abuse before it starts and generating support for the world’s animal rescue community.

learn more about the campaign here…

(SHOW YOUR SOFT SIDE)