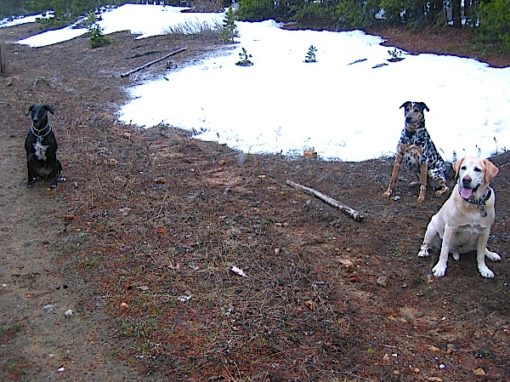 Q:  On two occasions more than a year apart, our six year old golden retriever has collapsed, not being able to stand to support her weight, begins shaking, eyes squinting with shallow breathing; scares the heck out of us, but recovers over a five to ten minute span.  On the first occasion, she was running around on some trails. She was wearing an unleashed choke collar so we thought that she might have not been getting enough oxygen.  (We no longer have a choke collar.)  On the second occasion she had just gone through a rambunctious bout of attention getting barking before she collapsed.  What do you think happened?  Is there something we should have checked?

A:  The two episodes you have described in your six year old Golden Retriever, each a year apart sound like one of two things: either syncope, a fainting condition caused by the heart disease, other diseases or seizures due to idiopathic epilepsy.

Syncope, or short fainting episodes, may be due to a number of different disease states.  Does your dog have a cardiac murmur?  Has it ever been tested for heartworm disease.  Has it ever been diagnosed with Addison’s disease?  There is also a condition known as a vasovagal response, or a nerve conduction response brought on by increased activity (she was running around and rambunctious on both occasions).  Does she have a bradyarrhthymia (slow heart rate)?  Does she have any pulmonary or lung disease?  Her health history is important in making an accurate diagnosis.

Idiopathic (meaning no known cause) epilepsy can occur in younger dogs and strike without warning.  It is an uncontrolled, erratic electrical activity in the brain.  When this activity occurs, an animal goes through three phases – pre-ictal, ictal and post-ictal.  Ictal refers to the actual seizure and the others are the periods immediately preceding the seizure and immediately after the seizure.  A typical seizure consists of an animal becoming very quiet and somewhat withdrawn prior to the event, the event which may consist of collapse, paddling, foaming at the mouth, and loss of control of both the bladder and bowels, followed by a period of disorientation and quietness

In either case, I would be sure to have your girl examined by your veterinarian, have blood work run, have x-rays of her chest taken, have her tested for heartworm and know that she may need a referral to a cardiologist for an echocardiogram.