A piece of personal history from Southwest Airlines in-flight magazine… 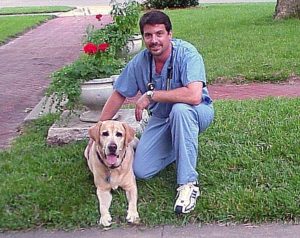 When a rattlesnake struck Andrew Streiber’s dog Lili five years ago, Streiber, a California-based recording industry executive, immediately rushed home from a New York City business trip to be with his beloved pooch.  To him, the decision seemed obvious: Lili’s life was in danger.  What Streiber never imagined, though, was how the ornery reptile would forever change his own life.

“I know what it feels like to see a despondent owner come into a hospital with an injured or sick animal,” says Streiber.  “I ended up spending a week watching the doctors at my local animal hospital save her life.  I wanted to be that doctor.”  Today, Streiber is wrapping up his first year at Kansas State University College of Veterinary Medicine, anticipating his graduation with the class of 2006.

“This was, needless to say, a life-altering decision,” says Streiber, who was already ensconced in a high-profile, well-paying job.  “I was at the hospital every night trying to garner information about Lili’s condition and what venom could do an animal,” he says.  By the third night, one doctor took note, asking Streiber if he’d ever considered being a veterinarian.  “He said I was smart, caring, and asked a lot of good pointed questions, and that sparked me,” he says.  “By my asking the right questions of the vet, he, in retrospect, asked the right question of me.”