Back in the ’70s, there was an awards ceremony for animal movie stars broadcast on network television.  These days, the tradition has been revived online.  Here’s a look at annual awards for animal actors, past and present… 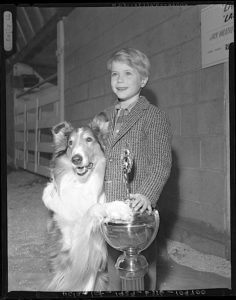 The PATSY Award was originated by the Hollywood office of the American Humane Association in 1939. They decided to honor animal performers after a horse was killed in an on-set accident during the filming of the Tyrone Power film Jesse James. The letters are an acronym, and stand for Picture Animal Top Star of the Year. A later acronym was also included: Performing Animal Television Star of the Year.

The very first recipient of a PATSY was Francis the Talking Mule in 1951, in a ceremony hosted by Ronald Reagan at Hollywood’s Carthay Circle Theater. The award later covered both film and television and was separated into four categories: canine, equine, wild and special. The special category encompassed everything from goats to cats to pigs – Arnold Ziffel of TV’s Green Acres was a two-time winner. Arnold’s trainer, Frank Inn, was the proud owner of over 40 PATSY awards, thanks to his work with Orangey, the cat from Rhubarb (1951) and Breakfast at Tiffany’s (1961); Higgins, the dog (who played the lead in the Benji movies and “Dog” on Petticoat Junction); Cleo the Basset Hound; and Lassie, and Tramp the dog from My Three Sons to name a few. Lassie was retired to the PATSY Hall of Fame after receiving many awards over the years.

The Craven Award was named in honor of Richard C. Craven, the first director of the Hollywood AHA. It recognized animals that would normally have had no opportunity to appear in a starring role. The TV and Movie Animal Walk of Fame was established in front of the Burbank Animal Shelter, honoring certain early recipients of the PATSY Awards.

In 2011 the American Humane Society created a new animalcentric award event, the Pawscars, to “recognize an indisputable measure of a great film: Ensuring that ‘No Animals Were Harmed’.”  Yesterday, this year’s winners were announced…

from THE AMERICAN HUMANE ASSOCIATION

Best Puppy Under Pressure – “The Interview”

Best Magical Cow – “Into The Woods”

Best Supporting Equine – “Dawn of the Planet of the Apes”