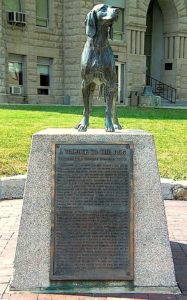 George Graham Vest (December 6, 1830 – August 9, 1904) was a U.S. politician. Born in Frankfort, Kentucky, he was known for his skills in oration and debate. Vest, a lawyer as well as a politician, served as a Missouri Congressman, a Confederate Congressman during the Civil War, and finally a US Senator. He is best known for his “a man’s best friend” closing arguments from the trial Burden v. Hornsby in which damages were sought for the killing of a dog named Old Drum on October 18, 1869.

Vest took the case tried on September 23, 1870, in which he represented a client whose hunting dog, a foxhound named Drum (or Old Drum), had been killed by a sheep farmer, Leonidas Hornsby. The farmer (Burden’s brother-in-law) had previously announced his intentions to kill any dog found on his property; the dog’s owner was suing for damages in the amount of $50, the maximum allowed by law.During the trial, Vest stated that he would “win the case or apologize to every dog in Missouri.” Vest’s closing argument to the jury made no reference to any of the testimony offered during the trial, and instead offered a eulogy of sorts. Vest’s “Eulogy on the Dog” is one of the most enduring passages of purple prose in American courtroom history (only a partial transcript has survived): 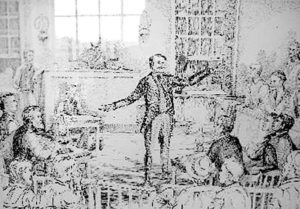 “Gentlemen of the jury: The best friend a man has in this world may turn against him and become his enemy. His son or daughter that he has reared with loving care may prove ungrateful. Those who are nearest and dearest to us, those whom we trust with our happiness and our good name, may become traitors to their faith. The money that a man has, he may lose. It flies away from him, perhaps when he needs it the most. A man’s reputation may be sacrificed in a moment of ill-considered action. The people who are prone to fall on their knees to do us honor when success is with us may be the first to throw the stone of malice when failure settles its cloud upon our heads. The one absolutely unselfish friend that a man can have in this selfish world, the one that never deserts him and the one that never proves ungrateful or treacherous is his dog.

Gentlemen of the jury: A man’s dog stands by him in prosperity and in poverty, in health and in sickness. He will sleep on the cold ground, where the wintry winds blow and the snow drives fiercely, if only he may be near his master’s side. He will kiss the hand that has no food to offer, he will lick the wounds and sores that come in encounters with the roughness of the world. He guards the sleep of his pauper master as if he were a prince. When all other friends desert, he remains. When riches take wings and reputation falls to pieces, he is as constant in his love as the sun in its journey through the heavens. 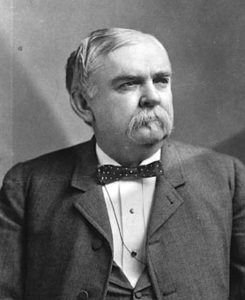 If fortune drives the master forth an outcast in the world, friendless and homeless, the faithful dog asks no higher privilege than that of accompanying him to guard against danger, to fight against his enemies, and when the last scene of all comes, and death takes the master in its embrace and his body is laid away in the cold ground, no matter if all other friends pursue their way, there by his graveside will the noble dog be found, his head between his paws, his eyes sad but open in alert watchfulness, faithful and true even to death.”

The speech has been used in movies which are set in Missouri and involve sheep owners who allegedly shoot the dog but are then shot themselves by the dog’s owners, who are then tried for murder: “The Voice of Bugle Ann” (1936), “Tribute to the Dog” (1964) and “The Trial of Old Drum” (2000).