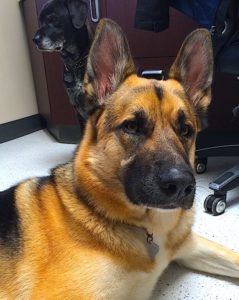 Too often, we jump to take extreme measures to try to “fix” dogs, rather than changing their environments — and our standards — in order to better accommodate their natural tendencies.

Take, for example, a common issue we hear about at School For The Dogs: Nuisance barking.

Barking is not a dog problem – the four-legged set is generally not bothered by vociferousness of any kind. Rather, it is a human problem. It’s a problem to us because we find it annoying, but it’s also a problem we have largely created. Dogs descend from wolves, who don’t bark. One of the roles that humans very likely played in dog evolution is to have selected for barkiness. Up until just a few generations ago, a majority of dogs were working dogs, and one of their main jobs was to warn off intruders. They excelled at this task. Today, we unwittingly encourage this trait we selected for by putting dogs in dwellings full of human-caused noises that trigger them to alert us to danger: Sirens, UPS men in the hall, door bells.

As a dog trainer, I do what I can to help people see barking as a modifiable behavior, and silence as a behavior, too. The more you reward your dog for the behavior of keeping quiet — you can use a pinpointing tool like a clicker or a marker word to “capture” those quiet moments, which sometimes may come and go very quickly — the more your dog will be likely to keep his mouth shut. However, the difficulty of untraining barking is that barking is a behavior that is rewarding in and of itself. Your dog might learn that he’ll get bacon for being quiet when the mailman knocks, but the joy of barking may win out over bacon.

For this reason, I preach the virtues of problem management: If you  have a crazy barker, don’t force him to live in an environment full of stimuli. Have guests call you instead of ringing your doorbell; keep your dog confined to a room that is far away from the noisy hallway. In the very worst cases, I might suggest an owner consider finding a new home for their dog – somewhere that isn’t full of triggers that are going to make him go hoarse. Otherwise, you’re just fighting an uphill battle against more than ten thousand years of evolution.

Getting rid of a dog that barks is a sad and unfortunate thing to have to do.  But I think it’s a management approach that is far kinder than another unfortunate route that I’ve seen people take: Cutting their dog’s vocal cords.

This surgical procedure, which is called debarking, devocalization or ventriculocordectomy, involves removing a dog’s vocal cords with an incision made either through the mouth or the neck. It doesn’t stop a dog from barking – obliterating their ear drums would probably be more effective. Debarking just makes the barks harder for your neighbors to hear. I recently fostered a dog who had been debarked. She sounded like a veteran smoker who’d swallowed a tincan of coins. It was painful to listen to, and far more annoying than run-of-the-mill barking. Several potential adopters told me they couldn’t take her because the sound was just too gut wrenching. I had to guess that her talkativeness led to her previous owners performing the surgery, and probably to their relinquishing of her. Had they taken the inevitable step of giving her up before they’d taken away her voice, she might’ve had a better chance of finding a home.

Silencing a dog isn’t just sad — it can also lead to other behavior problems. A bark can be a dog’s warning signal to people and dogs that are too close for comfort. Deprived of the ability to alert in a natural way, a dog is likely to revert to another form of saying “back off”: biting. Ohio actually prohibits devocalizing dogs that are considered “dangerous,” since their barking can be crucial in warning someone who might otherwise get close enough to be bitten.