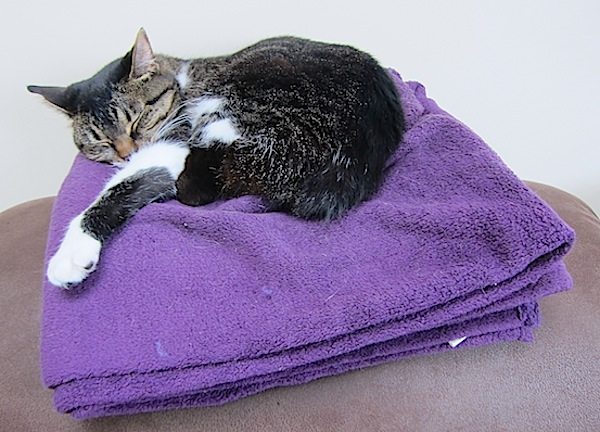 Q:  I have a young cat who was brought in from outdoors to be a house pet. She is not the first and probably won’t be the last, but I am at my wit’s end as to what how to get her to use the litter box when she urinates.

A:  A cat that eliminates inappropriately (outside of its litter box) is both a common client complaint and a difficult problem to solve.  In this case, you have an outdoor (feral I presume) cat, which you have made into an indoor cat.  You said that she uses her litter box to defecate, but not to urinate, instead choosing (and using) her favorite spot in the middle of your kitchen.  And, you have already tried a multitude of remedies – vinegar spray, dryer sheets with a citrus fragrance (which has worked wonders for the other cats with whom you have had trouble), scolding her and showing her the litter box when she does it; you’ve tried the so-called deodorizer sprays that are supposed to eliminate any evidence of previous use in that spot, all to no avail.

Before this tiny and timid girl is re-relegated to the outdoors, I would try a few more things first in order to find out if you can’t get her to change her behavior. Add at least one more litter box to the house (one per cat plus one), not necessarily in the spots she likes, but nearby; try a different cat litter, perhaps even shredded paper; and try a pheromone spray.  Other options include adopting another, older (perhaps even slightly dominant) cat that you know already knows how to use a litter box for both urination and defecation with the idea being that the older cat, once established, will “show” or “teach” your cat about proper bathroom etiquette. If none of these are successful or you are not able to try any of them, have your veterinarian refer you to a board certified animal behavior specialist for a consultation / evaluation.

Don’t cast her outside just yet, at least not until you have exhausted all of your options.