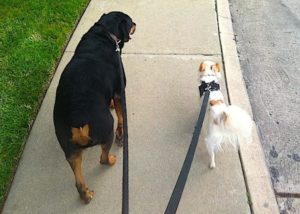 Chaparral-covered hillsides dotted with oaks surround both sides of a barbed-wire fence with signs reading: “U.S. boundary.” John Gladwin, whose Australian cattle dog, Molly, runs freely through the idyllic Simi Hills on a Sunday afternoon, is careful not to cross this border into the federal territory called the Santa Monica Mountains National Recreation Area.

If he’s caught with so much as a foot in the park, which stretches 50 miles from the Hollywood Hills to Point Mugu, the 69-year-old retiree will go to jail. Even more unusual, Gladwin cannot leave a seven-county area, for any reason, without permission from his probation officer.

“Molly and I have never been cited for anything causing any kind of problem. This is all so ridiculous, spending all this money to do this,” Gladwin says of his 12-month federal probation.

“The probation department doesn’t even take it seriously,” he snickers. “They deal with gangbangers, drug dealers, murderers. And here I am, for a dog leash.”

The crime for which Gladwin has twice been convicted is a dog-leash citation, violation of Title 36, Volume 1, Section 2.15, Part 2 of the National Park Services’ remarkably detailed regulations: “failing to crate, cage, restrain on a leash, which shall not exceed 6 feet in length, or otherwise physically confine a pet at all times.”

How did a self-described environmental activist and lifelong nature lover become the National Park Services’ most wanted?

It’s not that Molly, 3, or Gladwin’s elder dog, a 14-year-old Chesapeake Bay retriever named WeBe Jammin’, have ever menaced hikers, equestrians or wild animals inside the park, whose meandering eastern border practically engulfs the Old Agoura home Gladwin shares with his wife and two dogs. It’s that he has violated the leash laws six times in five years on the land several hundred feet from his home.

Last year, Gladwin refused a plea bargain put forth by a federal prosecutor over a dog-leash violation and insisted on a trial. While awaiting that trial, Gladwin in October got yet another citation. Now park rangers are intent on ensuring that Gladwin learns his lesson, even if that means jail time. Today, even if he enters the park without a dog, he can be arrested.