The New York Times reports that the modern canine may have originated in Asia, 15,000 years ago… 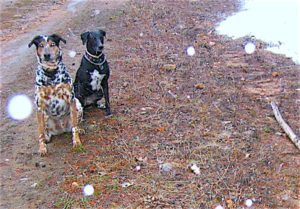 Where do dogs come from?

Gray wolves are their ancestors. Scientists are pretty consistent about that. And researchers have suggested that dogs’ origins can be traced to Europe, the Near East, Siberia and South China.

Central Asia is the newest and best candidate, according to a large study of dogs from around the world.

Laura M. Shannon and Adam R. Boyko at Cornell University, and an international group of other scientists, studied not only purebred dogs, but also street or village dogs — the free-ranging scavengers that make up about 75 percent of the planet’s one billion dogs.

Dr. Shannon analyzed three different kinds of DNA, Dr. Boyko said, the first time this has been done for such a large and diverse group of dogs, more than 4,500 dogs of 161 breeds and 549 village dogs from 38 countries. That allowed the researchers to determine which geographic groups of modern dogs were closest to ancestral populations genetically. And that led them to Central Asia as the place of origin for dogs in much the same way that genetic studies have located the origin of modern humans in East Africa.

The analysis, Dr. Boyko said, pointed to Central Asia, including Mongolia and Nepal, as the place where “all the dogs alive today” come from. The data did not allow precise dating of the origin, he said, but showed it occurred at least 15,000 years ago. They reported their findings Monday in Proceedings of the National Academy of Sciences.

Greger Larson of Oxford University, who is leading an international effort to analyze ancient DNA from fossilized bones, said he was impressed by the scope of the study. “It’s really great to see not just the sheer number of street dogs, but also the geographic breadth and the number of remote locations where the dogs were sampled,” he said. He also praised the sampling of different kinds of DNA and the analytic methods.

But in the world of dog studies, very little is definitive. The most recent common ancestor of today’s dogs lived in Central Asia, Dr. Boyko said, although he cannot rule out the possibility that some dogs could have been domesticated elsewhere and died out. Or dogs domesticated elsewhere could have gone to Central Asia from somewhere else and then diversified into all the canines alive today, he said.