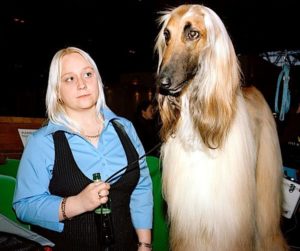 The phrase “dogs are man’s best friend” is one that may be traced from well into the past all the way to the present and is likely to resonate regardless of where a person lives in the world.

In 1870 in Missouri during the Burden v. Hornsby case, U.S. Sen. George G. Vest presented the closing remarks on behalf of Charles Burden, whose beloved dog Old Drum was shot to death by Leonidas Hornsby.

Photographers Will Robson-Scott and Ollie Grove’s photo book “In Dogs We Trust” — like Vest’s past “Eulogy of the Dog” about the unconditional love and loyalty of man’s furry friend toward his owner — highlights the present common belief that dogs are man’s best friend.

In the photo book, childhood friends Robson-Scott and Grove explore the special relationship and capture the intimacy and affection that exists between dogs and their owners. “In Dogs We Trust,” published and designed by Victory Edition, contains portraits shot on film and under natural light of dogs with their owners.

The title draws upon the phrase “In God we trust,” as there are comparisons to be made regarding how people may be reliant on their dogs in the same way they are on their religion.

The portraits were made around the world, from California and New York and across the Atlantic to London. This diversity throughout “In Dogs We Trust” unleashes the commonalities of the world.

“We started out just really wanting to do an almost survey of modern-day dog ownership,” Robson-Scott said. “And trying to show the widest spectrum possible — from the average Joes on the street to CEOs to entertainers.”

When deciding which portraits to include in the photo book, Robson-Scott and Grove sought out an additional perspective to ensure the final selections for “In Dogs We Trust” encompassed the perception of and interpretation from an external spectator.

“We worked on the project for about five or six years, so it’s good to have fresh eyes on it,” Robson-Scott said. “Also, when you put it in a book format you want things to read well together.”