Kimberly Cheng of KTLA 5 News, Los Angeles reporting from the ESAH where she speaks with Dr. Streiber about a highly contagious flu currently affecting dogs and cats… 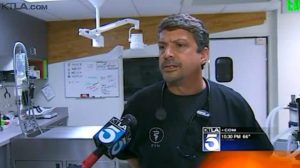 A highly contagious strain of the dog flu had made 1,300 dogs sick in Illinois, Indiana, Ohio and Wisconsin.

The virus, identified as H3N2, had never been seen before in the U.S., according to Dr. Andrew Streiber of the El Segundo Animal Hospital.

The canine influenza virus can be passed from pet-to-pet by a sneeze, cough, or nose-to-nose contact.

It was also being reported in cats.

H3N2 can live on surfaces and can be carried on human clothing and shoes, Streiber said.

The symptoms were similar to human influenza and included lethargy, fever and loss of appetite, according to Streiber.

In extreme cases, the virus can be deadly.

So far, no cases were reported in California, but like any virus the dog flu has the potential to travel, Streiber said.

The virus can not be transmitted to humans.

Posted in ESAH Events, In the News