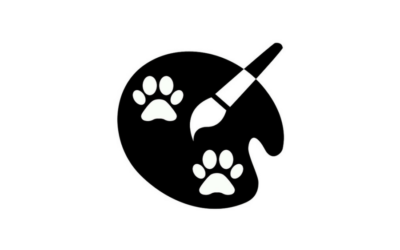 Here’s a great article from Salon about photographer William Wegman… 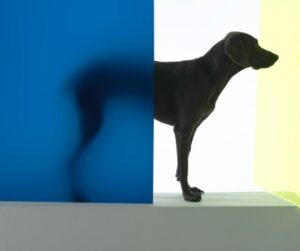 “Ever seen dogs treated as art supplies?” William Wegman moves a Weimaraner across a platform as if the creature were an 80-pound barrel of gesso. The art supply in question, Chundo, a 10-year-old male and son of Fay Ray, endures the process with a matter-of-factness, never dropping his straight-ahead stare as the photographer pushes him four inches to the left so that he and another dog, Chip, sit shoulder to shoulder.

“Don’t tell anyone how easy this is,” Wegman says.

He walks back to the camera — a $30,000 digital Hasselblad he just started renting by the hour. The equipment’s still new to him — he repeatedly fails to locate the trigger-release cord, the thing you squeeze to shoot a picture — but he doesn’t seem to mind. He squeezes and 10 seconds later an image pops up on a computer monitor. He peeks over at it. Grappling with unfamiliar machines is nothing new for Wegman. Indeed, several times in his career — most famously in 1978, when, at the invitation of Polaroid, he began photographing his first dog, Man Ray, with a large-format Polaroid camera — his experiments with new technology led to new ways of seeing, reinvigorated the way he worked, and helped introduce him to a wider audience. Once he’s studied the image on the monitor, he and the rest of his studio crew return to the platform for some more rearranging. 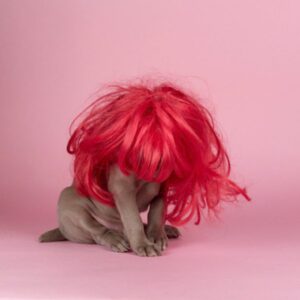 “I’m pretending I help,” he says, then begins to write this piece for me: “Unlike some photographers who make their assistants do all the work, Wegman actually gets down on this hands and knees …” Actually, by this point, he’s standing. The assistants continue with their tasks as he keeps up his soft-spoken deadpan.

The excitement in the room can’t be attributed entirely to a fresh technical challenge. There are also puppies who are sitting for their first portraits before handlers take them to the vet. One remains behind, venturing onto the platform without being asked, taking a place beside Chip and Chundo, apparently eager to work. The trio blend together nicely. The professional calm of the practiced models seems to rub off on the first timer — until there’s a noise at the door and all three dogs stand and bark at once. Wegman squeezes.

When the session is over, he puts his sneakers back on and walks out of the studio and back up the stairs of the former schoolhouse he now calls home. The dogs rush to follow, their nails clicking on the cement as they scurry by him. 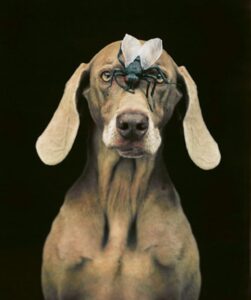 Conversations about real estate in New York often function as a sort of shorthand biography. By this measure, Wegman has led a fascinating life since 1973, when he moved to the city at the age of 30. His first sublet, on 27th Street, was so dingy and uninspiring that he instead chose to camp out in an abandoned factory in East Hampton. (The factory office, with its authentically bad ’70s paneling, is the location for the video “Spelling Lesson,” in which Wegman patiently explains Man Ray’s spelling mistakes as the loyal dog listens.) By 1978, he and his wife Gayle Lewis occupied two floors of a Tribeca loft — until a fire destroyed the place (along with his paintings, photographs and negatives). In 1982, he moved into a former synagogue in the East Village. In 1997, he bought the Chelsea schoolhouse where he now lives with his third wife, Christine Burgin, their two children and his current brace of Weimaraners.

It’s tempting to match each address with a stage in the artist’s career: fame, flameout, regeneration, maturity. But the bricks-and-mortar chronology doesn’t account for Wegman’s gentle Arcadian irony, which has its sources in other real estate. Wegman was born in Holyoke, Mass., in 1943, and he grew up in nearby Eastern Long Meadow, a small town marked by the ponds, fields and dirt roads of unimproved baby-boom suburbia. His father, George, worked in the local Absorbine factory, but the job was not a fair index of the family’s comfort or status: Longmeadow was a fancy enclave and the Wegmans regularly vacationed with the factory’s owner. Many children of the ’50s describe their parents as Ozzie and Harriet types, but when Wegman does so, there’s no hint of post-therapy resentment. He makes it sound like both an understatement and a compliment. 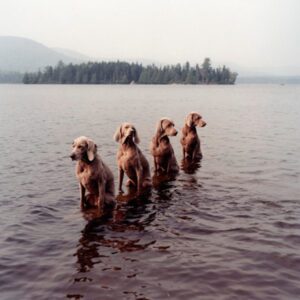 As is often the case with Wegman, underneath this gentle layer lies another gentle layer. His father, a “sweet and easygoing man” and the youngest of seven brothers, began working for Absorpine at the age of 16 after his own father died in an automobile accident: The family decided that the younger sons would work to support the clan while the older brothers went off to college. Apparently, the arrangement worked. A photograph that Wegman took in 1984 shows the brothers, safely landed in their sunset years, silver-haired, in a variety of horrendous plaid slacks, Bermuda shorts, golf shirts, white socks. None of them face the camera, but instead direct their attention to each other — each seems to be in the middle of telling a different joke. They are also in on the joke Wegman is making — it seems clear they enjoy indulging Billy the Artist. An air of amiable foolishness stretches from generation to generation.

Posted in Pets in Art