All dog owners know, their pets will gnaw on just about anything.  So it should come as no surprise that canines will chew on a fungus named after their own droppings.  Fortunately however, Pisolithus Tinctorius, also known as Dog Turd Fungus is not known to be harmful to animals.  This interesting post by the University of Florida, Institute of Food and Agricultural Sciences, explains this mysterious mold… 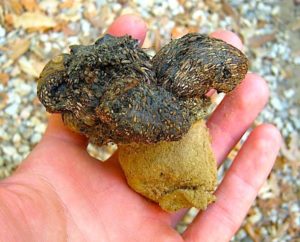 This week’s blog was written by guest blogger Dustin H. Purcell, MS. Dustin is a Mycologist/Plant Pathologist who studied at the University of Florida.

This is a true fungus (just like other mushrooms, toadstools and puffballs) named Pisolithus tinctorius, and apparently a nice purple to coppery golden brown fabric dye can be made from them, though I confess to have never tye-dyed with this shroom. Like the “dog vomit fungus” discussed in an earlier blog post, it looks like something that might have been left behind by a dog. In more polite company, you might say it looks like a stalked puffball sculpted from chocolate. They range in height from 2 to 6 inches and terminate in a bulbous knob from 1 to 3 inches in diameter. Initially they are covered by a smooth firm skin, but this weathers away to expose and liberate the cocoa-powder-looking spores inside.

This fungus is mycorrhizal, meaning that the portion below the ground (which happens to be significantly more than the portion you see above the ground) forms mutually beneficial relationships with trees. The faux-latin word mycorrhizae is formed from the latin words for fungus and root. The below ground portion grows through the soil as microscopic strands which decay organic matter (like rotting leaves), absorb nutrients and water, and wrap around the roots of trees (especially pines and oaks). Though these odd mushrooms may be many yards from the trees with which they form mycorrhizae, rest assured that they are in partnership with at least one of the trees nearby. The fungus exchanges nutrients and water with the trees, allowing the plants to grow well under harsh conditions. They are credited with helping trees survive drought conditions and for this reason are important to forestry. They can be seen sporadically throughout the year in Florida anywhere trees grow, especially on dry sandy soil. They are not uncommon to see around oak trees planted in parking lots and median strips where they undoubtedly aid the trees in these stressful environments.

They are not known to be harmful to people or animals and are helpful to trees in the landscape. For these reasons, try to appreciate their ecological importance rather than being put off by their gross appearance.

Posted in In the News, Pet Tips