CNN filed this report on an amazing archeological find… 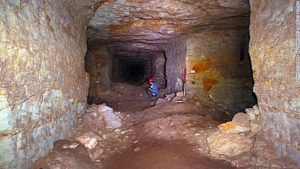 For centuries, dogs have been humans’ loyal, domesticated companions. They’ve been wild animals, doing what’s needed to survive. And in ancient Egypt, they served as bridges to the afterlife, with the hope that they’d intercede with the god Anubis on their owner’s behalf.

But only now is it becoming known the extent to which dogs served this latter role — 8 million times over.

That is the number of dead animals, most of them dogs, estimated to have laid in the catacombs of Anubis around Saqqara, one of Egypt’s most historic and oft-visited sites, according to a group of British researchers. While such mass burials aren’t unprecedented, given the numerous animal cults of ancient Egypt, this one’s scale makes it unique.

“We’re very pleased and somewhat surprised by the results,” the project’s director Paul Nicholson from Cardiff University’s School of History, Archaeology and Religion said Saturday. “We hadn’t expected that there would be so many animals, and it opens up a new series of questions.”

One question that experts can at least partially answer is why an Egyptian might have brought an animal, dead or alive, to such a place.

Nicholson, who has been studying animal cults since the 1990s, explains that people wouldn’t have come simply to kill or even bury an animal so much as allow it to move onto a different plane. A dog, especially, would be a good fit because it might then interact with Anubis, an ancient Egyptian god of the dead depicted with the body of a man and head of a dog or, its close relative, a jackal.

“The important thing was to provide a representation of the god with a fitting burial,” Nicholson said. “It’s not some sort of blood sacrifice. It’s a religious act that’s done for the best possible motive.”

The animal’s owner would hope that, by doing this, “some good will come to you,” the Wales-based Egyptologist noted. “Maybe you’re hoping that the animal will help someone in your family who has died recently (so that) Anubis will take care of that (relative).”

Just as Egyptians’ view of Anubis, and dogs, has been common knowledge for some time, so too have the dog catacombs of Anubis. This includes a map from 1897 that shows their location clearly marked.

Still, most of the focus was on temples outside the catacomb. Until, that is, Nicholson’s team — with the support and help from Egypt’s Supreme Council of Antiquities and sponsorship from National Geographic — began working on the Saqqara site around 2009 and began exploring deep inside.