A great article from the N.Y. Times about canine brain power… 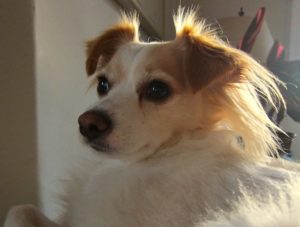 Not to brag, but we may have a little genius on our hands. Our 6-month-old is up before dawn playing brain games. She knows her way around an iPad and practically devours puzzles, and I’m teaching her to read. Just recently, she mastered an advanced chess toy.

I am talking, of course, about our dog.

Let me rewind a moment. The last time I had a puppy, I was 9 years old. This might as well have been in the Mesozoic era, since life with a dog was so primitive then. If Buck was good, he got Gaines-Burgers and maybe a Milk-Bone. Bad, we’d deliver stern admonitions over the half-eaten sneaker. But within hours of adopting our fuzzy, adorable Pi, I sensed that being a pet parent today — nobody uses the word “owner” anymore, apparently — means cultivating intelligence, manners and communication skills the way the parent of, say, a small human might.

Our canine compadres no longer eat from mere bowls. Now there are interactive feeding products like Dog Twister (imported from Sweden, no less, for around $50), with rotating hidden compartments that make dogs reason their way to kibble. Another, called Slo-Bowl, pays homage to the artisanal food movement, with “nature-inspired” rubber curves and ridges that keep dogs “foraging for every bite,” the company’s website says ($20). A doggy tick-tack-toe puzzle from Petco encourages “problem solving” and increases “eye-paw-mouth coordination,” for $17. Smartphone apps like App for Dog, iSqueek and Answers: YesNo let puppies doodle, nuzzle virtual chewies and even recognize a few simple words. Others help them take selfies. Then there is the spreading quantified dog movement: A San Francisco company called Whistle Labs makes a wearable activity monitor — a Fido Fitbit, basically, for $129 — that tracks a dog’s every sit, stay and roll over.

Needless to say, I bought it all. My wife and I were already micromanaging our son’s schoolwork, food intake, extracurricular activities and playdates; why not helicopter Pi to the far limits of her breed? Which, come to think of it, meant figuring out what breed she was in the first place: Mutt doesn’t quite cut it these days. For $70, the scientists behind Wisdom Panel 2.0 will “uncover DNA-based insights that may help you understand your dog’s unique appearance, behaviors and wellness needs,” according to the package. Two awkward cheek swabs later (“I’ll hold her head, you twirl the Q-tip thingee,” my wife said), we were a lab test away from knowing Pi’s pedigree down to eight great-grandparents.

A new dog is nothing if not a mystery shrouded in fur. What exactly was lurking behind Pi’s smoky eyes? Would she be a charmer, a rocket scientist or a bumbling, tail-chasing dolt? For answers, I turned to Brian Hare, an evolutionary anthropologist who studies behavior at the Canine Cognition Center at Duke. Last year, he started Dognition, a web-based testing service that charges $29 and up for a series of rigorous at-home video experiments to evaluate your dog’s cognitive skills. The results are fed into a database with tens of thousands of dogs to determine one of nine personality types: “socialite,” “maverick,” “renaissance dog” and so on.