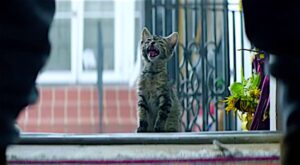 If you’re a fan of Comedy Central’s “Key & Peele” and a lover of cats, get excited that the comedy duo have made a film in which they play two buddies trying to rescue a missing kitten from the seedy underworld of gangland Los Angeles.  Peels plays a hipster, Key plays a square and the world’s newest feline film star plays the kitty, Keanu, in this action-comedy which opens April 29th.  Directed by Peter Atencio.