Architect Ronald Castellano is the force of nature behind some of recent history’s most outstanding historical building restorations in Lower Manhattan.  Add to this his duties as nightclub owner, restaurateur and street fair promoter, and you might be surprised to find he also makes time to rescue cats… 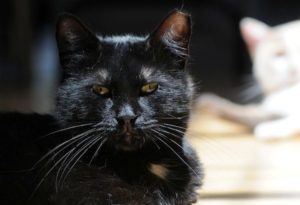 ESAH:  What led you to rescue your first cat?

CASTELLENO:  It was about two years ago, I kept seeing this black cat wandering around Mulberry Street.  He was friendly, but very displaced and scared.  One night around 2 a.m., I saw him just as a taxi was approaching.  It was a dead quiet Tuesday — I was surprised to even see a cab.  So, I grabbed the cat by his neck, flagged down the taxi and asked if I could bring him inside.  The cat was howling, but the driver was okay with it.  I named him Junior.

ESAH:  How many cats have you rescued?

RC:  I’ve rescued somewhere between twenty-five and thirty cats.  I have fourteen at the moment.  One just had three kittens!

ESAH:  Where do you find them?

RC:  I find most strays on my late-night travels through Chinatown, back and forth from Santos or Le Baron.  They come out after midnight until about 5 a.m., so after I leave the clubs, I run into them wandering about.  I concentrate mostly on Henry Street, near Oliver.  Parking lots have many good spots for cats to hide, and the attendants don’t mind because they keep the rats away.  I guess most are abandoned, and I’ll bet some are lost deli cats. 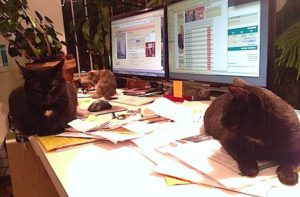 ESAH:  What’s life like for a cat on a NYC street?

RC:  It’s rough.  Eating trash, poisons.  Some are killed in car engines they’ve crawled into, looking for warmth.  People abuse them.  They get hit by cars.  Winters are very difficult…

RC:  There was a cat I named, Xeno.  When I came upon him, I saw he was missing a foot — and his bone was sticking out!  I have no idea what happened to the poor guy.  That was intense.  But he’s fine now.

RC:  Cats are independent.  And they have a lot of style.  It’s exciting to gain their trust.  But you have to work hard at it.  They don’t just become immediately attached.

RC: Yeah, people all over the city are doing this: rescuing, fostering or just feeding the feral cats.  They are not really well known, but they’re out there, trying their best to make a difference.  So, as always, if you can, adopt from the rescue shelters — it really helps. 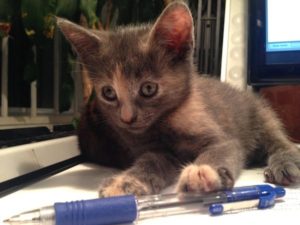