A fascinating piece on a great breed, from the NY Times Magazine… 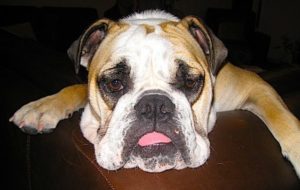 In the first half of Georgia’s football game against South Carolina in 2009, Uga VII, who had been dozing on a bag of ice in his air-conditioned sideline doghouse, was cajoled onto the field to pose for pictures with some cheerleaders and Gov. Sonny Perdue. Uga (pronounced UGH-uh) wore his trademark red Georgia jersey and spiked red leather collar, and he looked bored as an ESPN cameraman shoved a camera in his wrinkly, smooshed bulldog face.

His modeling complete, the country’s most famous dog mascot appeared ready to nap again. “Sometimes he thinks he’s a lap dog,” explained his owner, Sonny Seiler, a prominent Savannah lawyer and the mercurial 78-year-old owner of the University of Georgia bulldog mascot dynasty. Seiler bears a striking resemblance to the Georgia bulldogs he has cared for since 1956. He has a round, droopy face and wide, slumping shoulders, and his courtroom antics are often described in words associated with bulldogs: Georgia Magazine said he possessed a “barrel-chested bravura,” while John Berendt wrote that Seiler “thunders and growls” in his best-selling nonfiction book, “Midnight in the Garden of Good and Evil,” in which Seiler defended a wealthy antiques dealer charged with the murder of a young hustler.

Before the game, I sat with Seiler in the front of his S.U.V., which was parked in its usual spot near the west end of Sanford Stadium. The car’s rear door was open, allowing fans a close-up look at the state’s most famous pooch. Not that there was much to see. Flanked by two headset-wearing security guards, Uga VII lounged in his crate with his eyes closed, seemingly oblivious to the chaos around him. “Over here Uga!” “Say cheese!” “Uga’s da man!” screamed a throng of fans, who snapped pictures and video of the sleeping all-white dog. (Each Uga has been a white male, leaving Seiler open to the occasional charge of doggy sexism and racism.)

“Uga is a celebrity,” Seiler explained to me as he cracked open a beer. “If we let him out right now, it would start a damn riot. He’s the dog version of Michael Jackson. People go crazy when they see him.” People also try to kidnap him. Dog mascots are a favorite target of fraternity brothers from rival schools; Uga I was nabbed twice in the 1950s and ’60s.

At the time of my visit, though, Seiler was less concerned with people trying to take Uga than he was with people trying to change him. In January 2009, Adam Goldfarb of the Humane Society of the United States told The Augusta Chronicle that bulldogs, often referred to as English bulldogs, are the “poster child for breeding gone awry.” The article came in response to a scathing British documentary, “Pedigree Dogs Exposed,” that highlighted the health and welfare problems of purebred dogs and claimed that breeders and the Kennel Club (the British equivalent of the American Kennel Club) were in denial about the extent of the problem.