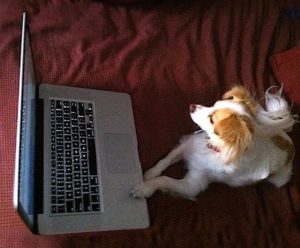 When Steve Werner began to experience a ringing in his ears and general malaise, he attributed it to nothing more than grief. Camden, one of his two beloved dogs, had just passed away and he believed that his condition was simply a side effect of the anguish he and his surviving Golden Retriever, Wrigley, shared. For weeks, Werner and Wrigley spent most of their days curled up together, bonded in their sadness and heartache at the loss of a friend.

As Werner’s symptoms persisted, he decided to visit his doctor to try and pinpoint the cause of his malady. All the tests came back negative and his doctors were left dumbfounded as to the possible reason for his discomfort. Without a diagnosis or any evident cause for concern, Werner returned home but was left with the uneasy feeling that something wasn’t right. Then Wrigley’s behavior abruptly changed. Instead of lying calmly next to Werner, she began to obsessively sniff at his right ear. At first Werner thought Wrigley’s inquisitiveness was a gesture of companionship, but once she focused her fixation on the opening of his ear canal, he began to worry that maybe she was trying to tell him something. His anxieties reached a pinnacle after watching a segment on 60 Minutes about dogs who were trained to detect impending epileptic seizures, identify tuberculosis, and detect cancer. Werner began to suspect that Wrigley had discovered something that his doctors had missed.

He decided to revisit his doctor and insist upon further testing. After undergoing an MRI, it was revealed that Werner had a tumor the size of a ping-pong ball surrounding his auditory and vestibular nerves on the right side of his head—the same side Wrigley had been focused on. His particular tumor was benign, but could still have resulted in facial paralysis, hearing loss, and stroke. Werner underwent surgery to have the tumor removed, suffering some temporary facial paralysis from the procedure, but eventually made a full recovery. Suffice it to say upon his return home he was happy to find that Wrigley had no interest in the right side of his head.

Wrigley is not alone in her ability to miraculously identify an otherwise undiagnosed disease. In fact, recent studies have confirmed that dogs have the ability to detect cancer and other diseases in humans using only their sense of smell. Scientists believe that this results from their ability to recognize the different chemical signature that tumourous cells emit when compared to healthy cells. Thanks to the unique biological design of your dog’s nose, his sense of smell is anywhere between 10,000 and 100,000 times more powerful than a human’s (so think twice the next time you leave those dirty socks lying around!). While it is still unclear what makes a dog’s olfactory capabilities so extraordinary, it is evident that much more of a dog’s brain is devoted to this particular sense. Dogs also have a much greater convergence of specialized neurons responsible for smell, from the nose to the olfactory bulb in the brain, and much larger olfactory receptors, scent membranes located within the nose. The receptors found in a human tend to be the size of a postage stamp, while those found in dogs can be as large as a handkerchief.