The NY Daily News reports that a strange cat, claimed to be as big as four feet tall and forty pounds, is scaring the locals… 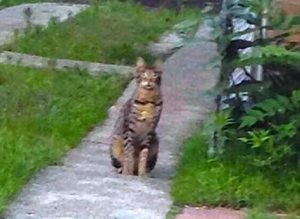 A large-sized cat is roaming northeast Detroit, scaring residents along the way.

A mysterious large-sized cat is on the loose in Detroit, surprising and scaring residents in the northeast part of the city.

“His tail is longer than my arm,” 6-foot-5-inch Antwaun Asberry told the Detroit Free Press. “I was like, what the (expletive) … I don’t know what it is. I just want it gone.”

The Michigan Humane Society is searching for the unusual animal, but hasn’t located it yet, an official with the organization told the Daily News on Monday.

Authorities don’t know where the cat came from or how it got loose.

“Neighbors have been saying that it hisses and that it runs from them and that it’s been out here for a month,” Laura Wilhelm-Bruzek of the nonprofit Paws for the Cause Feral Cat Rescue told Fox 2 News. “So my guess is, someone had it that wasn’t familiar with the breed, thought it was a really cool thing to have, decided it wasn’t for whatever reason and threw it outside.”