Not an episode of “Portlandia”… 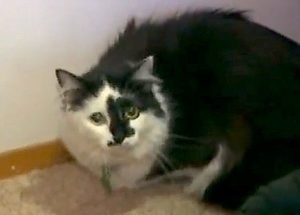 A rampaging, 22-pound Oregon house cat with a “history of violence” attacked a baby and trapped a family and their dog in a bedroom at their Portland home before being captured by police, authorities said on Monday.

The Sunday evening incident began when the cat, a black-and-white Himalayan, scratched a 7-month-old baby in the face, according to Portland Police Bureau spokesman Sergeant Pete Simpson.

The baby’s father kicked the cat in the backside, which sent it into a rage, and the parents and baby, along with their dog, retreated into a bedroom as the father called police, Simpson said.

Meanwhile, the cat blocked the bedroom doorway and could be heard on the 911 call screeching loudly, Simpson said.

“He said that the cat has a history of violence,” Simpson said, referring to the father speaking to the 911 operator.